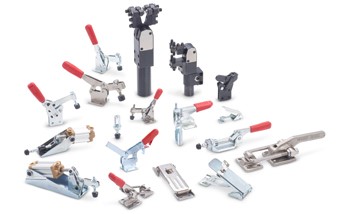 In addition to toggle clamps and pneumatic clamps, this group includes toggle latches and pull clamps.

Toggle clamps are used in machine construction and in industry for securely fastening or closing movable parts. These standard parts are manually operated clamping systems that typically function according to the toggle lever principle and are also known as toggle lever clamps.

The range of toggle clamps is complemented by the accessories. It allows the separate acquisition of spindle assemblies and their holders to deviate from the set principle to develop a special configuration.

A toggle latch is a standard part for lasting and secure closure of flaps, covers and similar removable parts. Dead center is overcome as the clamping mechanism is closed, which securely locks the toggle latch in the closed position. A toggle latch with safety catch is also designed to prevent accidental opening.