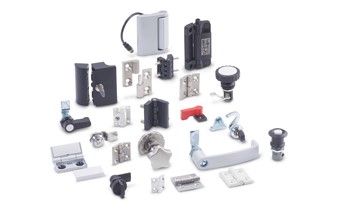 Latches latch doors and covers with a 90° turn of the operating element, which positions a latch element behind the frame. Angled edges on the latch element make the locking easier. Depending on the requirements, various fastener and rotating latch types are available for selection.

Latches with clamping function latch doors and covers with a 180° turn of the operating element. A latch element is moved behind the frame, and a subsequent axial tensioning motion of the latching element presses firmly against the edge protection profile of a door, for example. Depending on the requirements, various clamping and compression latch types are available for selection.

Hook-type latches with a hook and bracket are primarily used for sliding doors and covers. They lock radially to the rotary axis, which allows them to be used in a variety of applications.

Accessories for fasteners, rotating latches and compression latches include insertion keys for actuation as well as protective covers, opening handles and engagement ramps for use under special conditions. Sheet metal punches simplify the creation of the required mounting holes.

Hinges are typically used for mounting doors and covers to swing open or closed. These standard parts are widely used in mechanical engineering. Due to the wide range of different designs, there are practically no limits on the possible applications.

Multiple-joint hinges, also known as concealed hinges, are a new type of hinge offering freedom of design. Mounted inside the housing to save space and protect against vandalism, they allow an opening angle of up to 180° on flaps, hatches and doors. This ensures that the inside of the housing is optimally accessible. In general, the outside of the housing remains free of attachments that do not match the design or must be avoided entirely due to special requirements, such as ease of cleaning.

Adjustable hinges hold and fasten doors and covers to equipment and housings with a pivoting movement. Depending on the design, the hinges can be adjusted along their fastening slots vertically and/or horizontally relative to the hinge axis, such as to adjust the door gap size.

Detachable Hinges hold and fasten doors and covers to equipment and housings with a pivoting movement. They consist of two hinge halves, and depending on the design, they have a fixed or loose hinge pin, allowing them to be detached. This simplifies installation when multiple hinges are affixed in parallel or the door is very heavy.

Hinges with adjustable friction hold and fasten doors and covers to equipment and housings with a pivoting movement. Thanks to the specially designed hinge axis, these standard parts, also known as friction hinges, have an adjustable braking torque that evenly brakes the movement of the hinge over its entire range of motion to prevent it from moving on its own.

Lockable hinges hold and fasten doors and covers to equipment and housings with a pivoting movement. The specially designed hinge axis enables a clamping function by means of a clamping lever, allowing the hinge to be locked at any hinge position.

Hinges with indexing function hold and fasten doors and covers to equipment and housings with a pivoting movement. The specially designed hinge bearing enables a locking function with which the hinge can be held closed or at specific opening angles with a spring-loaded retainer.

Spring hinges are used to make doors open or close automatically. The ideal addition to a flap hinge with spring is a snap lock or slam latch.
The spring hinge consists of two hinge halves with interior torsion spring. When the door is opened, the spiral spring in the hinge is compressed, generating an opposing force. Once the door is released, the folding hinge with spring returns to its initial position, closing the door.
Ganter carries spring hinges made of robust die cast zinc or glass fiber-reinforced plastic as well as a variety of sizes and torque values.
Despite their compact design, hinges with spring-loaded return offer a long service life. Tests have shown that the spring tension remains fully intact even after 100,000 closing cycles.

Hinges with an electrical switching function pivotably hold and fasten doors and covers to machines and housings and additionally allow integrated, electrical safety switches to monitor their status. When the doors are opened, several switch contacts are actuated that, for example, interrupt a safety circuit and simultaneously sig-nal that the door has opened.